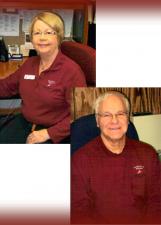 In 1948, Carroll and Marie Fallgatter formed a new grocery business in Northwood, Iowa, that became a Fallgatter family legacy,
Fallgatter's Market made its start in the building at the corner of Central Avenue and Eighth Street and later expanded into the adjacent building to the west.

The business thrived and in 1967, after deciding that business volume dictated a larger store, Carroll, Marie, and their oldest son, Craig, moved Fallgatter's Market to its present location at the corner of Seventh Street and First Avenue North and established the firm as a corporate entity.

Following Craig's untimely death in 1975, Carroll and Marie's youngest son, Doug, and his wife, Gloria, moved back to Northwood to become more involved in the business, taking over respective duties as store manager and office manager.

Under Carroll's guidance, the store continued to prosper. Doug and Gloria were elected company president and secretary-treasurer, respectively, before Carroll's death in August, 1989.

Numerous changes have occurred during Doug's tenure as president. One of the company's most pivotal moves came in November, 1991, when Fallgatter's Market aligned with Affiliated Foods Midwest to capitalize on the better products and lower prices Affiliated offered.
Doug has served on the Affiliated Foods Midwest board of directors for the past seven years and can attest to the many great things that Affiliated provides including three Midwestern warehouses—one in Norfolk, NE, one in Kenosha, WI, and another in Elwood, KS. The Norfolk warehouse has nearly one million square feet under one roof. Affiliated also offers "Power buys," which enable its independent grocer members to buy large quantities of groceries, fruits and vegetables at lower prices.

Throughout its history, Fallgatter's Market has provided employment to many Northwood-area residents. Younger adults who are still in school often work there due to the flexible work hours. The company also promotes teamwork, responsibility and great customer service through public interaction.

Fallgatter's Market still offers the specialty services Carroll instituted long ago, and continues to add to its repertoire. The company also donates to many community functions, school activities and benefits.